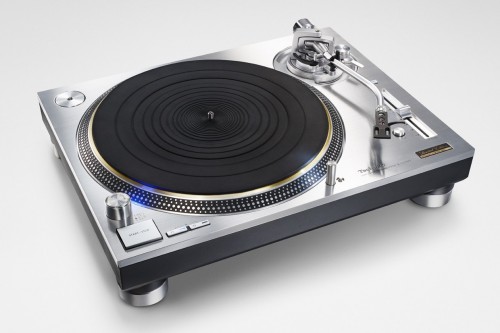 The legendary Technics SL-1200 turntable has been a mainstay of the DJ scene for decades now, but the tanklike direct-drive turntable has also long had a quiet reputation for sound quality as well. And for the 50th anniversary of the SL-1200, Technics is releasing two new “Grand Class” models aimed at audiophiles: the aluminum-cased SL-1200G and the magnesium limited anniversary edition SL-1200GAE, of which only 1,200 will be produced. (Get it?)

Apart from the case, the new models all have new “high-dampening tonearm” and a “three-layered turntable,” which are words that audiophiles who buy a limited edition magnesium record player are sure to be excited about. There’s also a new microprocessor controlled direct-drive system which eliminates something called “cogging,” a scrouge so terrible that Technics devotes a full paragraph to it in the press release. Here is that paragraph. Behold its majesty:

Direct drive turntable systems have been beloved by HiFi enthusiasts since their birth in 1972. However, one problem that direct-drive systems have always faced was sound quality degradation caused by ‘cogging’, or tiny vibrations of the motor and rotational speed fluctuations. However, by combining the knowledge and expertise gained as the originator of direct-drive turntable systems with a newly developed coreless direct-drive motor without iron core, this ‘cogging’ can be eliminated. Any potential minute motor vibrations are suppressed even further by high-precision rotary positioning sensors guided by a microprocessor controlled system; a feature unique to the new Technics turntable.

Vinyl record sales have been booming lately, so it’s not at all surprising that Technics is capitalizing on the SL-1200’s mystique here — we’re actually expecting to see a few high-end turntables at CES 2016. No word on pricing, but expect these to be crazy expensive when the 1200GAE arrives in summer and the 1200G hits late in the year. (Also, 50 years’ worth of SL-1200s are also available on eBay and Craigslist in virtually every city in the world, if you’re that impatient.)

NEWS: The New Club Kids Are In Second Grade