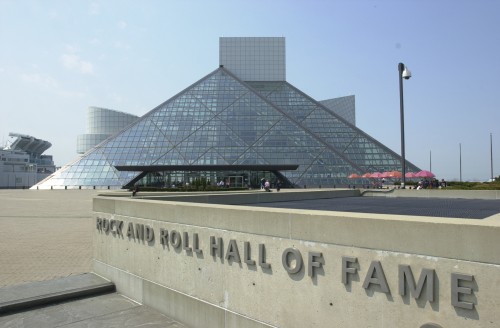 The Rock and Roll Hall of Fame has officially announced next year’s inductees: Cheap Trick, Chicago, Deep Purple, N.W.A and Steve Miller will all join the class of 2016. They will be inducted April 8th during a ceremony at Brooklyn’s Barclays Center, with tickets on sale to the public in February. HBO will broadcast the show in the spring.

Artists are allowed to enter the Rock and Roll Hall of Fame 25 years after the release of their first album or single, though this year, nearly every act has been eligible for some time. N.W.A, who made their fourth appearance on the ballot this year, is the only group to form after the 1970s. “This means that the group’s mark is solidified,” Ice Cube tells Rolling Stone. “We got some of the most creative, talented people in N.W.A that’s ever been compiled in one group. It’s just exciting that the group as a whole gets recognized by the whole industry as Hall of Fame-worthy.”

“When we started N.W.A, I couldn’t have imagined this,” Dr. Dre adds. “I never thought the type of music we were making would receive such a high accolade. I have always done what I love to do, so to be inducted into the Rock and Roll Hall of Fame is unreal. I am humbled to be included in such an amazing group of great artists. ”

Cheap Trick guitarist Rick Nielsen is equally excited. “Usually, I’m a man of many words, but this has got me in a tizzy here,” he says. “I’m verklempt … Live at Budokan wasn’t too bad. Getting our first record deal wasn’t too bad. Doing 5,000 shows, not too bad. But this might get moved right to the top of our résumé.”

For metal giants Deep Purple, the induction comes after years of passionate lobbying by their loyal fan base. “With so many lineups, it’s a minefield,” says drummer Ian Paice, the only member to serve in every incarnation of the band. “If I was running the Hall of Fame, I wouldn’t have known how to do it…But it looks like we’re in and I’m very pleased.”

Chicago have been waiting just as long as Deep Purple to enter the Hall of Fame. “Frankly, I was very surprised that we’d been nominated since we’ve been eligible for so long,” says Chicago co-founder/keyboardist Robert Lamm. “I think that the body of work, even just considering the work we did on the first album and beyond, changed the face of pop music for us to be considered influential.”

Every act besides N.W.A has a current touring entity, and they all have former members that may join them on the big evening. Of particular interest to metal fans will be the status of Deep Purple guitarist Ritchie Blackmore, who hasn’t played with the group since his departure in 1993. Drummer Ian Paice says he doesn’t know if he will even show up, let alone play with them. “He can confuse you sometimes,” he says. “You think he’ll do one thing and he’ll do the other. I wouldn’t put money either way on that one.”

Paice says that any decision regarding the performance will be made in conjunction with all the current members. “We don’t have salaried guys with [keyboardist] Don [Airey] and [guitarist] Steve [Morse]. They are fully accredited members of the band and they share in everything, and into decisions as well. They will have to be consulted and see how they feel about anything that the three of us originals think we would or wouldn’t like to do.”

The induction will also present Chicago with an opportunity to perform with singer/bassist Peter Cetera for the first time since he left the group in 1985. “I guess if it was ever going to happen, this would be a prime opportunity,” says Lamm. “And personally, I’d find it very moving … I talk to Peter from time to time. I know he hasn’t played bass in many, many years, as fine a bass player as he was. He’d certainly sing, at least I imagine.”

Cheap Trick fans also might get to see the group play again with original drummer Bun E. Carlos, who left the band in 2010. Does Nielsen think that might happen despite the legal issues the two camps have had in recent years? “I’m sure he’ll be invited,” he says. “Do I know if he will? I don’t know. Why not?”

N.W.A have staged numerous reunions in recent years, most notably to promote their acclaimed new movie Straight Outta Compton. “I think we can get Ren, Yella and Dr. Dre. together,” says Ice Cube. “I think Snoop might do an honorary Eazy-E. I can’t speak for him, but we’ll ask him. We’ll probably ask a few people.”

N.W.A joins an elite group of rap acts, including Grandmaster Flash & The Furious Five, Beastie Boys, Run-D.M.C. and Public Enemy, to enter the Hall of Fame. “That’s like the cream of the crop when it comes to groups that made an impact,” says Ice Cube. “What’s funny is that the hip-hop group basically started to fade away with Wu-Tang Clan. It went from groups groups groups to solo solo solo artists. I would be interested to see who is the next solo rapper that makes it into the Hall.”