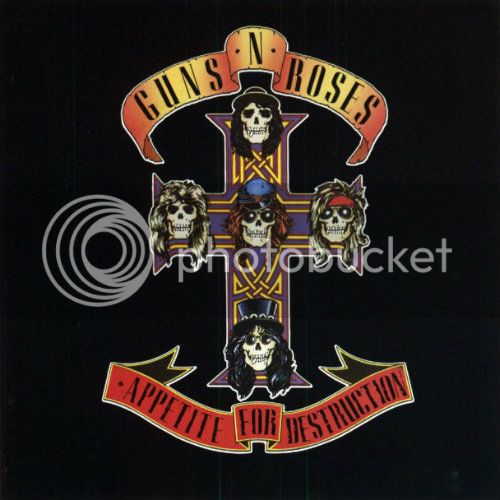 “In talking about Appetite For Destruction, an album that turns 25 on Saturday, it’s fun to think about the context that burped the band up: A group full of hard-partying Sunset Strip veterans who’d all done time on the L.A. pop-metal scene, led by an Indiana transplant that still thought of himself as some sort of off-the-bus hick delinquent and compensated accordingly. And that band happened to have both the ridiculous chops that the pop-metal scene required and a sort of alchemical, otherworldly chemistry that few other bands in history have ever displayed — one of the things that makes their quick dissolution so tragic. And that hick happened to have this sensitive sandpaper wail that sounded sensitive when it was trying to sound tough, and vice versa. That’s a deep and rare combination, and somehow it doesn’t come close to explaining how an album like this could happen. Instead, you almost have to think about the album in pure mythic terms. In his great Axl Rose thinkpiece a few years ago, John Jeremiah Sullivan wrote that Guns N’ Roses were “the last great rock band that didn’t think there was something a tiny bit embarrassing or at least funny about being in a rock band,” probably the best description I’ve ever seen of this particular band’s peculiar animal glamor. Their filth was mystical.

Let’s talk for a minute about “Paradise City.” It’s one of Appetite‘s most famous and everlasting songs, of course, but it’s also quite possibly the thinnest song on the album, the one that’s really not about anything in particular. Its hook is practically a nursery rhyme. And it’s been a part of our shared consciousness for so long that it’s impossible to think about the first time you heard it; it’s just always been there. But: Human beings wrote this song! Listening to it closely, that boggles my mind. Like someone had to say, “How about we throw a sharp whistle-blast in when the second, more dangerous riff kicks in.” And someone had to realize the exact right point to throw in the soul-crushing drum-fill while Axl was stretching out the word “far” as far as it would go. Because seriously, everything in this song lands at the exact right moment, and that’s something that’s just as true of the rest of the album. It’s a busy piece of work, layers piling up at all times, but you can always pick out every element. It’s a perfectly constructed machine, every gear doing its work.

I love “Patience.” I love the Use Your Illusion alums. I even have a weird affection for The Spaghetti Incident?, the ill-conceived punk covers comp that turned out to be the final Guns N’ Roses’ final document. When the band stretched out into ballads and nine-minute epics and the sorts of epic rock-band silliness that Axl decided every serious star had to attempt, he excelled at it. But Appetite is pure, unrelenting ferocity throughout, and it’s by far the finest thing the band ever did. It’s as pure, in its way, as the first Ramones album; just imagine “Sweet Child O’ Mine” standing in for “I Wanna Be Your Boyfriend.” Except that “Sweet Child O’ Mine” is obviously way better than “I Wanna Be Your Boyfriend,” and GN’R’s version of purity had tons more dynamic room than the Ramones ever showed. They shared plenty of stylistic ideas with Mötley Crüe and Poison and the rest of their Sunset Strip peers, but they also understood the New York Dolls and old-school L.A. hardcore and Latin freestyle and funk. Chuck Eddy, my old boss and one of my favorite critics, has gone so far as to call Appetite “disco-metal,” and that’s in the process of naming Appetite the greatest heavy metal album of all time. And it’s true: We have never expected a rock band to bring the sort of push-pull rhythmic inventiveness that they brought on this album. It’s a special thing.”

NEWS: Kaskade on the Rise of EDM, What He Really Does Onstage, and Missing San Francisco